As a child, one way I knew Christmas was officially around the corner was the arrival of the two TV listing magazines we had in the UK – the Radio Times for BBC channels and the TV Times for the independent ones. Due to some bizarre regulations the listings for the networks were kept separate, so you had to have both magazines to get the full picture. It was the only time of the year that my mother would buy them, and, in short order, they were swooped on, and meticulously examined to see what the Christmas movies were, and worse, what they might clash with.

That’s a roundabout way of me letting you know about one of the films that I won’t be missing this year: PADDINGTON 2.

Everything works. The characters are larger-than-life, but never to the detriment of the story. It’s wholesome, engaging and intricate, the director employing all manner of tricks and conceits to move the exposition along without boring infodumps. There’s a keen sense of jeopardy and a ticking clock that ramps up the tension. And who would have predicted that Hugh Grant would shake off all those short-hand assumptions from the 90s to really “go big” with one of the funniest and broadest performances I can remember seeing – a great example of an actor embracing the second (or maybe third) act of his career, and just pushing all his chips in to see what might come of being brave.

I’ll be sure to have the kids settled on the couch, with a bowlful of snacks, and maybe a sneaky mulled something within arm’s reach for me. I can think of no better way to spend a couple of hours. 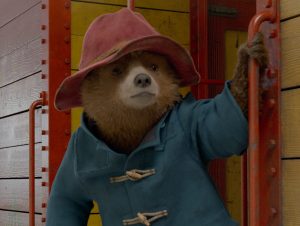