I wouldn’t want to be George R. R. Martin. Well, saying that, there are *some* benefits. But, when you’re working your way through one of the most significant literary works of the last fifty years, and the world notices, catches up, then overtakes your books, the pressure must be immense. Not only that, he’s also had to manage the feeling of anti-climax that has landed on those books thanks to criticism levelled at the HBO adaptation. That’s ratcheted up the weight of expectation even more.

Without wanting to go over ground trodden by many people before, I thought the last season of GAME OF THRONES was good, if rushed, and maybe high expectations could never be matched. The disappointment was amazing, though, and it quickly gathered its own momentum. Never have I seen something fall from grace so quickly, with merchandise that once cluttered up aisles in all kinds of different retailers seemingly disappearing overnight. And yet, despite all that, Martin still has to finish his story.

Perhaps it’s something of a blessing in disguise. He now gets a free hit, absorbing the criticisms that were directed at the show, and making tweaks – subtle or otherwise – to his story. Perhaps they will go some way to answering some of the issues people had with the conclusion.

I do wonder if the weight of expectation means that this is a fool’s errand – it’s impossible to please so many people, especially when they have such high investment in the stories that you tell.

I’ve been pondering this as I’ve been reading his stories for the first time. Thankfully, the distance of time means I can enjoy the saga with fresh eyes, and the depth in his storytelling gives me the space to assess it without constantly finding myself comparing it to the television show. It’s a remarkable piece of work, and I’ve only read the first book so far. The complexity and breadth of the world he creates is amazing, and despite a lot of “high fantasy” he manages to make it engaging and personal, without getting lost in the world-building.

My stories work differently. My aim is for each story to stand on its own merits, and whilst there is some connective tissue with previous books, I try hard to ensure that the reader is never left feeling lost because of events that may have happened before. Perhaps I will try a different approach one day, and write something along the lines of Martin with his many characters and plots, but, reading A SONG OF FIRE AND ICE, I have nothing but admiration for his skill and talent. 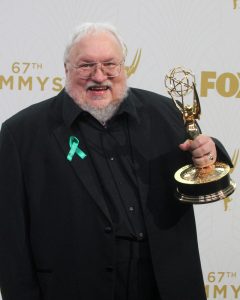