You’ve heard it. I’ve heard it. “Where do you get your ideas from?” is the all-time cliché question for anyone who has ever thought about writing at any kind of serious level. And understandably so. The question can sometimes mean “what’s the secret because I’d love to do it?” as I think nearly all of us enjoy the experience of telling a good story. Just think – everyone has it in them, even if it’s a funny story about what happened during the day, the real joy of seeing everyone else enjoying the telling is a feeling as old as language. But the answer – or rather my answer – is that it’s constantly building a supply of pieces that then can get assembled into a story.

Most writers keep notebooks close at hand, or constantly have a notepad app open on their phone or tablet. It’s vital. Ideas are all around us, from the experiences we share, or the news outside our window, or characters that we might have come across. That’s my start. Then I start to assemble these ideas together, stuck together with the phrase “what if?”. “What if” my character has to go to this environment? And then meet this person? All whilst having to avoid this threat? I might add some flavour inspired by music I’ve listened to, or a place I’ve visited, and then see how the whole thing looks. From this, I build and build, and then the vague idea starts to get hard edges, and I can then explore whether or not it’s an idea that is worthy of becoming a bit more than that.

However, the most important lesson I’ve learned is that there is (nearly always) no such thing as a bad idea. Often – and more often than I’d like – I abandon the idea. Sometimes it’s very soon into the process, and sometimes, even more painfully, it’s quite a bit further into development. That can be frustrating, especially if I’ve put a fair amount of effort into trying to get the idea up onto its feet. But even then, all is not lost. A bad idea can be stripped for parts, filed away, and then new ideas welded onto it as and when they occur to me. That environment that I set the story in, which wound up being frustrating or unworkable, could very well be used to tell a different story, or suddenly fly with the introduction of a new character or plot device.

I have files and files of notes, and scribbled pages from years of “what if” questions. Nothing gets thrown out forever. It might just get put back into circulation ready for reassessment when the time is right. So, if you’ve got the kernel of a story, but don’t know how to take it past a certain point, don’t despair. If I’ve learnt anything it’s to never say never when it comes to ideas, and just keep asking the most important question in writing – 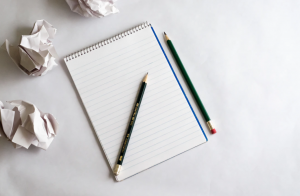