I am a massive fan of David Simon, like many, chiefly due to his work on THE WIRE, a contender for the best TV show of all time. I’ve followed his work ever since, from larger pieces like TREME, to smaller works like GENERATION KILL and SHOW ME A HERO. I’ve just finished THE DEUCE, another of his deep-dives, with a favourite creator of mine, George Pelecanos, this time focussing on pornography, prostitution and the progress and consequences of gentrification, set in New York in the 70s and 80s.

Ever since THE WIRE, I’ve really resonated with how these stories push back against expectation, something which was a huge and refreshing surprise when I first saw it. THE WIRE could very well be a straightforward white-hat, black-hat tale of cops and robbers, but Simon isn’t interested in stuff like that. Nuance and realism is key to his characterisation, with him giving us reasons to empathise with villains, and see the standard hero-roles in a new light as he introduces shades of grey. THE DEUCE follows that template – characters are flawed, and frustrating, which encourages the viewer to believe them, and believe in them. With characters we like, we cheer when they succeed because they have had to work hard to find their victory, and yet, often those victories come with hitherto unconsidered consequence. Maybe not like life per se but realistically enough that we believe it more.

The other thing that draws me to Simon and his themes, is his successes at wrongfooting expectation. “Chekov’s Gun” is a narrative conceit where “if a gun is seen in act 1, it needs to be fired in act 3”. Simon is aware of this, but works incredibly hard to create a narrative where consequences are justified and “true” but still with an element of surprise or unexpectedness that ensures that we feel drawn in when we join the dots. It happens time and again in his work – little bits of business that pay off, thanks to hard work and a real understanding of pacing. Not too much, and not too little. I’m wary about revealing them for fear of spoiling the experience for you, but I’ll just mention one from GENERATION KILL that sticks with me

There is a character in the army platoon featured, who is almost a caricature of the two-dimensional drill sergeant role. In nearly every episode, he will berate a soldier for not maintaining dress standards, underlining his unpleasantness, given the tense situation. It is only in the last episode that the sergeant mentions to his superior that he has been sure to be hard on the troops, and their dress standards, in order for them to have someone to be angry at, focussing their minds on something other than the pressures of war. Brilliant. Hidden in plain sight. 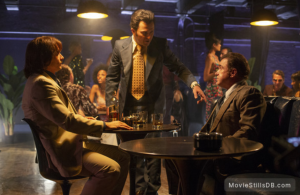