As a complete u-turn from my usual choice of viewing fare, I thought I’d treat myself to a nostalgia trip, and see whether the latest iteration of IT created anything that might cut through culture like the first iteration of Pennywise did all those years ago. Like most people, I have read a few Stephen King books – I distinctly remember reading MISERY in my teens, which, despite everything, didn’t dissuade me from wanting to be a writer – though I don’t think I read IT. I was never much of a big horror fan, to be honest, either going further into the fantastic with sci-fi or fantasy, or when I broadened my tastes, looking for stories that were more grounded in reality. But even at a tender age, it was apparent to me that King is obviously a master craftsman, with total understanding of the genre, and its potential.

Having watched both parts of the new version, I have to admit, I was somewhat nonplussed by the experience. Unfortunately, I just felt that it fell victim to the same pitfalls that the original mini-series did – it’s very long, and too reliant on “greatest hits” techniques when it comes to the scares. Maybe that’s the point? Is IT designed to be an ultimate distillation of horror tropes, trying to pick away at enough fears and phobias that everyone experiences something that might make the hairs on the back of their neck prick up? I felt that that was maybe the downfall of the movie(s) in that it tried so hard to be something for everyone, I wonder if it worked for anyone?

One thing I can’t fault is the production – the cast are good, albeit wasted, and the production values are supreme, but I was left with the feeling that it was a beautiful looking car with a less-than-powerful engine. In fact, it reminded me of the original production in many ways, which I also found over-long, though that, at least, had the bonus of Tim Curry completely leaning into the role of a lifetime as the original Pennywise.

But horror is difficult. As an exercise, I have asked people to name me their top five horror films, and in contrast to other genres of film, I find that people really struggle to name five absolute gold-plated classics, maybe because horror, over and above any other genre, seems to be so wedded to the tropes, IT being no exception. But I’m hopeful, too. As horror appears to be the genre that has the greatest cost-to-return ratio for budget (see how Blumhouse have become a huge player in Hollywood, with huge receipts from lower-risk budgets), there is less pressure on filmmakers, encouraging more experimentation. Ari Aster, Robert Eggers, and Jordan Peele are just three names who are doing interesting things in the genre, and hopefully, in time, I’ll be able to fill out my own top five without having to scratch my head as much. As for IT? Well, it’s a comforting nostalgia trip, and clearly very well put-together, but I’m going to push out into the edges a little more to see if I can find something to surprise me. 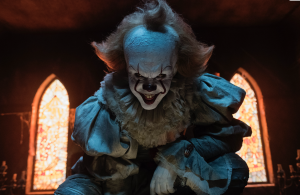