As I’ve mentioned, I’m finding it important to take solace in distraction at the moment, for obvious reasons. With that in mind, I sat down to watch a few films this week, with HELL OR HIGH WATER the first one I’m going to talk about.

I’m definitely someone who likes to be surprised by the things I sit down to watch, so, other than a vague recommendation and perhaps some knowledge of the pedigree of the film-makers, that’s about all I knew about this film. I really enjoyed SICARIO for a number of reasons – I think the director of that film, Denis Villeneuve, is incredible, and it was shot beautifully, as always, by Roger Deakins – so when I saw that HELL OR HIGH WATER was written by the same writer as SICARIO, Taylor Sheridan, it immediately caught my attention. Other than that, I went in blind.

The film is fantastic. As a writer, I often try and look at the mechanics of a story as I’m enjoying it, to try and get under the bonnet to understand how it made me feel the way it did. To see whether the plot followed well-worn paths, or if it delivered something that might at first appear familiar, but then surprised me by going in a different way. HELL OR HIGH WATER certainly did the latter. Superficially, it appears to be a tried-and-trusted white hat/black hat film, with the grizzled old lawman chasing down the enigmatic crooks in his last case, but it then subtly subverts those tropes in a similar way to NO COUNTRY FOR OLD MEN, by pulling our sympathies in one direction then the other. No-one is whiter than white, and characters that ostensibly seem to be “bad” or “crooked” have other motivations that might go some way towards explaining their actions – in short, the characters felt real.

Another aspect of it that I really enjoyed was the effort made to make even the smallest parts interesting. It’s something I try to do in my books, so that characters who might otherwise appear to just service the plot become memorable or individual, even to the point where the reader might want to actually spend a bit more time with them, in another time and another place. HELL OR HIGH WATER does the same, extremely well. Some well-known character actors are cast in single-scene roles, usually against type (Dale Dickey is cast not as trailer trash, or a drug addict, for instance), all to create a rich world that our main protagonists can move through.

I love films like this. High craft, and bucking stale formula, and a pleasing alternative to retreads and reboots. I’m certainly going to look out for these film-makers in the future, and hope they are given the opportunity to make thoughtful, exciting films like this again. 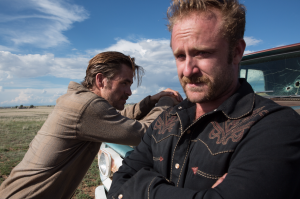