It’s happened. I fear I have finally tipped over into cliché. I have bought myself a road bike.

It’s all with the best intentions. Having only – until relatively recently – been given the chance to leave the house for an hour a day for government-mandated exercise, I found that I had exhausted every possible variation of walks using my house as a starting point. I am blessed to be surrounded by picturesque countryside and quiet paths, and found the opportunity to escape the four walls into the green a real tonic. But eventually the novelty was beginning to wear off and those lovely walks were beginning to feel a bit routine.

There was another motivator as well. I do like to run from time to time, as being at my optimum fitness has proved absolutely vital in regards to the very important task of wrangling the children. However, I’m not one of those runners who can find their inner bliss, floating along in a meditative haze as they bounce around the tracks. Instead, I’m much more of a “left leg, right leg” runner, concentrating on keeping everything pointing in the right direction, so not really an ideal opportunity to take in the scenery. I was hoping that a bike would give me a chance to clean the pipes out and have a decent workout, as well as taking in the countryside whilst exploring.

So far so good – I’ve been out a few times and I’ve enjoyed it massively. If there’s one thing that lockdown has given me that I hadn’t anticipated – and I hope to carry over once we come out the other side – is a fresh appreciation of the great outdoors. The lovely weather helps, and it’s far easier to hop on the bike when it is warm and sunny, so do feel free to check in and see how much use the bike is getting in the dead of winter. I’ve also managed to avoid – I hope – falling into the trap of, as my brother’s father-in-law calls it, of “looking like a burst sofa” in regard to the clothing I wear when I’m out for a ride, at least for now. I’m not sure Wiltshire is ready for the sight of me in lycra. 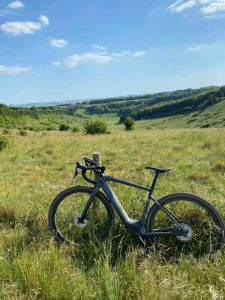