I’ve loved football for decades. And, by football, I betray my Anglocentric roots. I’m not talking about soccer (or “association football”, to use the proper term) – no, I’m talking about my love of gridiron, which may well have been the gateway drug to my affection for Americana.

I remember the first flickering of interest in the UK in what was known as “American Football” in the late ‘80s, particularly with the world-wide fame of the likes of William “The Refridgerator” Perry, but it wasn’t until I happened to find it hiding amongst the scheduling on UK television that I really started to follow the sport in earnest. One of the minor channels over here in the UK, Channel 4, relaunched their coverage in the early 90s. They focussed on a key game over the weekend, and then had highlights of the remaining games on a magazine show the following weekend. I was hooked.

The sport has everything I could possibly want.

It’s a game of statistics and I like numbers.

It’s like chess, with strategies of bluff and double-bluff.

It’s explosive. Some of the fittest and most powerful athletes on the planet crashing into each other, over and over again.

Coverage then was a far cry from the wall-to-wall coverage that we have over here today. Finding the NFL was a tall order in those days. We had a couple of hours of TV a week, but I wanted more. I found Armed Forces Radio on my transistor radio and would spend hour after frustrating hour as the commentary faded in and faded out, listening long into the night, as the weak signal bounced from one cloud to another.

I picked the Dolphins as my team, mainly due to Dan Marino, one of the superstar quarterbacks whose fame had made it across the water to the UK. I was desperate to show my support for them. By pure luck, a relative of ours happened to work for the only company that imported licenced NFL products into the country back then, so before long, we had an authentic ball to throw around in the back garden, and even some Zubaz tiger print apparel, which I can gladly report to have been lost to time.

Things have changed, thank goodness, and I’ve now been fortunate to see plenty of games, frequently attending the yearly games at Wembley and taking in the full gameday experience in the States a few times as well.

I’ve seen sport described as a “glorious irrelevance”, and it is, but I can’t wait to get back to my Sunday evening routine, relaxing with a gin or a beer, and a few hours gobbling up stat after stat as the soundtrack of tackles and cheers blasts out of the speakers. Who knows? Hopeless optimist that I am, maybe this year could be the Dolphins year?

I know, I know – let’s not get ahead of ourselves… 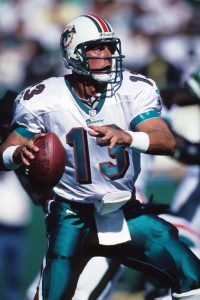