I’m sure you’ve all had quite enough of wading through the usual “best of” lists, so I’ll spare you mine. However, I would like to talk to you about one of the best things I watched last year: THE CROWN.

Even if you haven’t watched it you will likely have heard of it – one of Netflix’s prestige dramas, with budget and cast to match, a money-no-object production currently clocking in at four seasons with a brief to cover the reign of the current Queen. Irrespective of your views on the British monarchy, or monarchy of any stripe, it’s a fascinating dissection of both the mechanics of that institution and the larger-than-life characters that exist within it.

It’s those characters that have proven most interesting, not just for the lives they have led, but also as a source of discussion whenever a new character is cast, and the merits or otherwise of the assigned actor is chewed over. Gillian Anderson as Margaret Thatcher was certainly out of left-field…

I also couldn’t help but follow the discussion surrounding the truth or otherwise of THE CROWN as a whole. What obligation do the programme-makers have to be “true to life”, as it were, and how should that be balanced against the story that they want to tell? What responsibility do they have to reflect events accurately and without any editorialising? You won’t surprised to know that I come down on the side of the storyteller.

Real life just doesn’t work, dramatically. Of course, there is “drama”, but think about how we all create shape and form to the events that happen to us when we talk about them to other people. Without thinking, we set characters as protagonists (usually us) and antagonists (that idiot who changed lanes without indicating), give the story a definite beginning and a definite end, with all manner of supporting characters introduced or done away with. We tell stories for comic effect, massaging the facts to make sure that the punchline lands in the right place, or maybe even over-egg the pudding with a sob story, to encourage sympathy from the audience. THE CROWN does this, only with characters known to millions around the world – or, importantly, presumed to be known by millions. The framework can be suggested by so-called “real events” – indeed, if you are going to use characters that are drawn from real life then putting them in situations close to what they will have experienced is fairly usual (though, Bill and Ted may disagree…) but it can never be more than an inspiration. Otherwise, it just becomes dry reportage, and if you want that, then I suggest you switch over to the documentary channels.

Then comes the task of filling in the gaps, and building drama. And if we have only ever seen a person’s public persona, then a private persona will have to be created. And once that’s done, then comes the challenge of creating dramatic structure, heroes and villains, tension and release.

I think THE CROWN does this well. I have never been one to fascinate myself with the gossip surrounding the Royal Family, so I have no preconceptions regarding the “intrigue of the court”. They’re just interesting as characters; as archetypes, even. As to whether it is respectful to speculate for the sake of drama on the motivations of people who are “real” and still alive, well, I think I’d just point to the hundreds upon thousands of examples of this happening through history, for as long as stories have been told. I imagine the Royal Family are quite used to this, and see it as something of an occupational hazard. 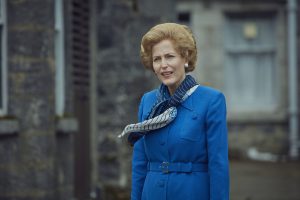