Amongst the flurry of books released in September, I note with interest a new book from Susanna Clarke. Released with a relatively short build-up (I only found out that a book was due maybe six or seven weeks ago), it has come as a wonderful surprise, and a book I will certainly look forward to reading.

Clarke released her first book proper, JONATHAN STRANGE AND MR NORRELL, a surprisingly long time ago now – some fifteen years or so, and then, after the excitement that that book caused, she retreated from the public eye. To find that her new book, PIRANESI, has been released, certainly came as a shock, but a very welcome one.

I loved JONATHAN STRANGE AND MR NORRELL – it’s a wonderful, mesmerising book, that creates a rich and plausible world, where “our” history has been nudged ever-so-slightly sideways, and Regency England is resident to magicians and magic, and plagued by capricious fairies and strange but very real folklore. Clarke creates this world in exquisite detail, using footnotes and asides to give real depth to the story she is telling, with a real feeling of authenticity, especially to anyone who has ever took even the most passing interest in those shaggy dog stories that England is so rich in.

The world is so wonderfully created that there must have been a temptation to continue telling stories in that setting, but, from what I gather, PIRANESI stands separate. The articles I’ve read about it are deliberately vague regarding the plot, but, regardless, I am still excited to read it. In support of PIRANESI, Clarke has undertaken a few interviews to promote the book which shed light on why it has taken fifteen years to publish. It’s hard to appreciate how much of an achievement it has been for her to write a book at all – in these interviews, she explains how she has suffered from a mysterious and debilitating illness that robbed her of energy, and left her previous capacity for work in ruins. It has taken her this long to build new techniques and methods to find the capacity to write again, and I find it hugely admirable how she has managed to find a way to cope with her illness.

Writers write. But there is no “right” way of doing it. I meet and talk to an awful lot of people who write, or wish to write, but if I could just give them one piece of advice it is to “keep going” – now that could mean a few sentences on a lunch-break, or those lucky few who have the ability to write hundreds, if not thousands of words a day. Each step forward is a step nearer to finishing. 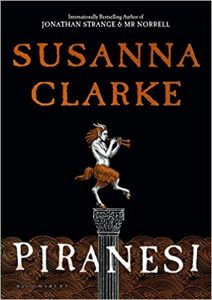