I sat down to watch LEAVE NO TRACE the other night. I’d read some positive reports and enjoyed director Debra Granik’s last film, WINTER’S BONE. I’m so glad I did. It’s one of the most affecting and touching films I can remember seeing for a long time.

It is deliberately vague in terms of back story, but it follows a father and daughter who are attempting to live “off-grid” in a national park in America. The reasons for this are never explicitly explained, though we are left some fairly strong clues in order to draw conclusions. There is a really touching bond between the pair and we are left in no doubt that the father is sincerely trying his best for his daughter, even though his methods and justifications might seem extreme or unsafe.

Of course, like any good story, “something” happens to challenge this status quo. The two of them have to navigate challenges as the outside world notices them, then tries to pull them back into everyday society. I won’t say more than that, just to avoid tip-toeing into spoiler territory, but I have to say I found this film a beautiful and rewarding experience on many levels. One of its really interesting aspects is how the story very consciously avoids cliché, creating characters that are presented without judgement, with depth and warmth. This is not as common in Hollywood as it should be.

It gave me a real enthusiasm to look at my characters again. My stories are, of course, more confrontational and oppositional than the story in LEAVE NO TRACE, but there are elements in that that certainly made me stop and think, and wonder if I can use any of the methods in the film. I think I’ve talked before about how the best villains are the ones who have something like a valid point of view, even if it is distorted or perverted. To be simplistic, the panto villain, clenching a fist and speechifying at the trapped hero is all well and good in small doses, but to make a truly memorable antagonist I think you need to give them weight, purpose and some kind of justification. No-one believes they are the villain of their own story, and by treating them with as much realism as the story can support the writer can make them more rounded.

Anyway – it’s a beautiful film, and one I very much recommend. 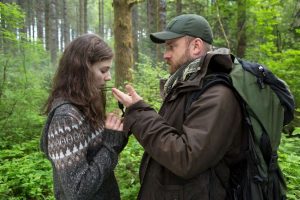