Shuffling through my lockdown library… One of the shows that I am watching for escapism has been HOMELAND, which is moving towards its conclusion after a very good innings. It struck me that it stands out as a great example of art being drawn from life, and has me wondering what the current global upheaval might inspire once the dust has settled.

HOMELAND is a complicated proposition. The creators contributed to 24, a show that mines similar themes, delivering them with the same emphasis on cliffhanger and ratcheted tension, though in a more lurid and less nuanced manner. 24 felt quite “soapy” to me, and that great ticking-clock conceit did exhaust itself after a couple of seasons. With HOMELAND, though, there are more shades of grey with the characters, the plot offering more space for debate on the compromises and concessions that the protagonists must take in order to save the day, not to mention a far more rounded and interesting lead character in Carrie Mathison, played at neurotic pitch by Claire Danes, than bull-in-a-china-shop Jack Bauer. Having Mandy Patinkin on the cast is never a bad thing, either.

Some of the subject matter and character portrayal felt clichéd, though, and watching it during the current crisis has made the pantomime villains seem more anachronistic than ever, as if they are from a different time completely. What it does well, though, it does very well, and as a writer of books that also try and take the reader on an exciting journey, I have huge respect for how the writers are able to deliver twists and turns. They often put the characters in seemingly inescapable situations, then manage to write them out of those corners. The antagonists very much reflect the boogeymen of the 21st century, of course, with the criticism of their often shallow depiction deserved to a large degree. I can see HOMELAND becoming a time capsule, or a curio, showing the zeitgeist in a way that may not hold up to viewing in the future.

If the current situation is to be fodder for writers, how will they create tension with a “villain” that does not grandstand or make speeches, or cackle and rub its hands together? I think it may very well be along similar lines to CHERNOBYL, which I’ve written about before – the villains of the current piece may well be those in positions of power who delay and obfuscate, or tug their forelocks instead of speaking truth to power. Let’s hope I’m wrong. 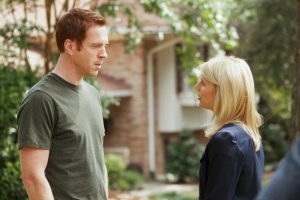