I’ve talked about many of my influences before, but another massive part of my formative years was having a childhood that corresponded with home computing becoming a reality, and not a far off pipe dream only talked about on dusty science programmes. Our childhood computers were the quirkily Anglocentric Sinclair ZX81 and 48k Spectrum, rubber-keys and all. The Spectrum in particular was the lightning rod for an incredible burst of creativity.

In retrospect, the invention that went into the creation of games back then, using the comparatively meagre hardware capacity, is staggering. In just a few short years, programmers, often from their bedrooms, wrung every last drop out of the capacity of the machines, and created games that many of my age still think fondly of. To think, the overall memory of the Spectrum wouldn’t have been enough to store a relatively simple email, yet the games created could keep me enraptured for hours.

One type of game that I really enjoyed was the text adventure – a type of game that really only lasted for a few years, being replaced by more advanced games as graphics and capabilities improved on the newer machines that made the first home computers redundant. I wonder how much the text adventure contributed to my own formative ideas on creativity – as with the Fighting Fantasy books I’ve talked about before, text adventures were seemingly a book that you could steer along a variety of paths of your own choosing, having to make decisions by inputting a few simple commands that would change the onscreen narrative.

Just imagine how exciting it was to actually “be” Sherlock Holmes, trying to solve a murder. Or to try and steer an unruly gaggle of dwarves to Lonely Mountain to get Smaug’s treasure. My imagination was on fire with new possibilities, and, no doubt, it encouraged me to look at the blank page as pure potential, and to write some exciting stories of my own. The basic nature of the available capabilities of these comparatively simple machines demanded that I fill in the gaps myself, or even speculate on other stories that I could set in those worlds.

Rest assured, I am not one for the “good old days” – everything in moderation. Trust me – I get as much pleasure slinging Kratos’ axe as the next person… 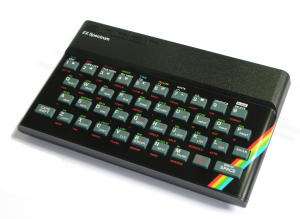