October is a month I enjoy every year, especially as Hallowe’en is just around the corner – a date in the calendar that it’s impossible for me to forget. It’s my birthday.

Hallowe’en has certainly become more an event in the UK than it did when I was growing up.  The influence from across the Atlantic has brought many of those traditions over here, and the day itself has become something different to what it was years ago.  It’s a big day for children now, with the opportunity to dress up and be creative, feeding both imagination and stomachs with a mix of vanilla ghost stories and sugary sweets. It’s certainly different to my experiences of Hallowe’en as a child, when we would, if we were lucky, be taken to a church hall or social club to be tormented by old ladies dressed as witches, with tasks like bobbing for apples or feeling around in wet spaghetti while blindfolded.

One thing that hasn’t changed is how the day encourages young and old to indulge themselves with the eternal pleasure of trying to scare each other.  The thrill of being frightened is something that will never change, people enjoying the adrenaline rush of surprise in much the same way as those braver than me who get their enjoyment by flinging themselves off suspension bridges, or jump out of planes.  Scary stories can work on many levels, from the reassurance of good finally triumphing over evil, or the nihilistic ellipsis of the cliffhanger ending, whatever the subject might be.

Is there anything as primal as being scared?  The purest of emotions, taking us right back to simple fight or flight responses, even when swaddled in the comforts and safety of home as we watch a scary film on the television.  Tapping into that feeling is something I’m very interested in exploring.  I certainly attempted to get some of that atmosphere with THE HOUSE IN THE WOODS, hoping to make the reader feel torn between reading on and having to put the book down and switch the lights on.

I’m always interested to hear from people what makes them scared – a film, perhaps, or a favourite book or story?  What was it about it that struck a chord?  Some magic concoction of time, place and circumstance, in tandem with the narrative, that made an indelible mark on the subconscious.  I still shiver when I think about the old public information film “Dark And Lonely Water” or that split-second glimpse of Pipes in “Ghostwatch”.  I’m sure you all have your own as well.

So, there we are – if the bell rings, don’t forget to give the zombies and vampires your offering of sweets and treats, have fun, and remember that the forces of good always win in the end…don’t they….? 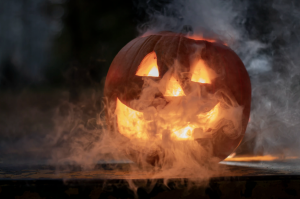