I’ve been rewatching BREAKING BAD recently, scratching an itch I’ve been meaning to get to since getting up to date with BETTER CALL SAUL. It’s been fascinating to go back and watch the show with the benefit of distance, and of knowing the ultimate final destination (or, at least, with the many theories and interpretations floating about, thinking I know the final destination). It got me thinking regarding a point I made in one of my previous posts, about how not everything necessarily needs an explanation, and the cottage industry that has grown up around “water cooler” shows to dissect every syllable and screengrab to try and build excitement for whatever might be coming next.

Because BETTER CALL SAUL mines BREAKING BAD relentlessly – after all, it has to. It is a prequel, set in the same environment with many of the same characters, building on and developing their motivations and backstory, and giving greater depth to the overall stories. It’s done sensitively and respectfully, ensuring that there is drama and pathos in the prequel without running the risk of sacrificing everything that has been created previously. I’m impressed by how the creators have walked that tightrope, and it’s no surprise that these two shows are almost certainly in my top 5 of all time.

What I’ve been enjoying is watching BREAKING BAD knowing that the creators of SAUL have done the same, to the nth degree. Every decision they have made complements the choices originally made, ensuring that nothing happens that could contradict events in BREAKING BAD. We think we know how these characters are going to end up, but even if that is how it all works out, the journey itself has been an enthralling one. These are series made like Swiss watches – intricate, thoughtful and precise.

I know a little of what they must go through creating this. I’ve written stories that look to fit into a continuity that I have established, and believe me, it is difficult. Once you have written something it becomes canon, and then, if you happen to dispute that content further down the line then it can drag the reader out of the story. And, with every word, you create more connections and more colour but also more complications to navigate. When it works, though, it really works, and you can create a rich world where one-note characters can get depth, and develop meaning and motivation that might not have been obvious at the time. 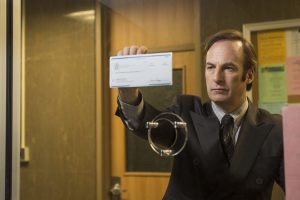