Late to the party as usual, but I’ve just finished THE LAST DANCE on Netflix, the hugely popular documentary series that focusses on the career of Michael Jordan, framed around the “Last Dance” of the title – the final season in his career as he and his Chicago Bulls team push for their final championship together, before the team is broken up.

As you know, I am a huge fan of Americana. My chief sporting obsession is football, but you would have to live in a very deep cave to be unaware of Michael Jordan and his impact, both at a sporting level, and the broader cultural impact. Having said that, I don’t think you necessarily need to be sports-minded to really enjoy this series for a number of reasons.

As a writer, I’m always looking under the bonnet at things I watch – it can be maddening sometimes, as I just can’t help myself, especially when I just want to switch off and enjoy something. With THE LAST DANCE, I was incredibly impressed with how they split up the structure of the series, with the overall framing narrative of the final season being married to a kind of “flashback” exploration of the career of Jordan and then episodic themes that explore his teammates, his upbringing and so on. It’s really cleverly done, and despite the complexity, I never felt confused or unsure of where we were in the story.

Jordan himself is a fascinating character. Like everyone on the planet, I was aware of him as as a cultural phenomenon in the 90s. He was pretty hard to miss, his status in his sport perfectly timed to also ride the wave of influence that black American culture spread around the world. Even growing up in a small seaside town in the late 80s and early 90s, hip-hop had moved firmly into the mainsteam, and Air Jordan shoes were the item of footwear at the top of every kid’s Christmas list. I wasn’t fully aware of the extent of Jordan’s genius, or what he himself was actually like – something which the documentary casts a light on in the most illuminating manner.

I’m fascinated by serial winners. I was wary that he might come across as someone like Lance Armstrong, who sacrificed everything – principles, most notably – to be the best. Jordan seems to have a vulnerability to offset a drive that could otherwise come across as ruthlessness, and somehow manages to inspire his teammates, some of whom are several levels below his incredible talents, pulling them up to achieve, rather than push them away. Most fascinating, though, was how he generates motivation to continue to be the best, focussing on sometimes trivial criticisms or slights to push him to his best time and again. Hilariously, on one occasion, he just makes up an incident of trash-talk from a rival, to get himself in that mindset. I can see that little mental trick being swallowed up and regurgitated at all manner of corporate training days, completely missing the point, of course…

Anyway – it’s a fascinating series, with incredible access to the team, Jordan, and some of the biggest names in American life. Sport is often described as a “glorious irrelevance” and that may be true, but as a distillation of life, I find it hard to beat. 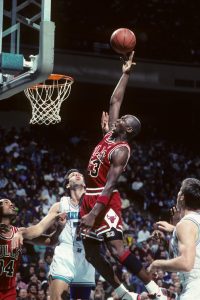