There were always comics in my house growing up, as with many people my age. They were everywhere, selling huge numbers, and across many genres. Every newsagent had shelves of them, covering all bases – the war comics, the sci-fi comics, the girls comics, the licensed tie-ins, and the humour comics that first caught my eye as a young lad. I remember my brother and I having an ottoman filled with the smaller, thicker “library” editions of the Beano and Dandy, which often used to appear for sale at the car boot sales we used to visit with my parents. My grandparents lived close to a newsagents, so whilst the adults talked, we were often given a few coins to go to see what was on the shelves there, to keep us distracted.

Eventually, as we grew up, and our tastes matured, my brother and I settled on a title that each of us would buy every week, setting up a standing order at the newsagent – my brother chose the legendary sci-fi comic 2000AD, and I chose its sister title, CRISIS.

CRISIS was a different kind of comic. It was developed to support the appetite for more “aware” content, lazily summed up in those late 80s articles about “comics being cool” that appeared due to the success of titles like THE DARK KNIGHT RETURNS and WATCHMEN, but, notably, with the odd exception, CRISIS steered clear of anyone wearing capes and instead looked to offer more contemporary and thoughtful stories aimed at an older audience than its peers. It didn’t always work, and, as is often the case with comics, there was a lack of direction and support from those holding the purse strings, and it found itself becoming more and more inconsistent. However, when it was good, it was great.

The story that stuck out for me was THIRD WORLD WAR, created by comics royalty in Pat Mills and Carlos Ezquerra, a near-future tale of the voraciousness appetites of big corporations, and how their influence is pervasive, single-minded and relentless. It was the first time I’d ever seen this sort of critique in a comic, and possibly across any of the culture I was exposed to at that age, and I think it contributed hugely to helping me develop my tastes as well as a healthy scepticism about the world, not least the dangers of being oblivious to some of the behaviours of those huge businesses who claim to be positive and wholesome and turn out to be quite the opposite.

I was hugely fortunate to meet Pat earlier this year with my brother (still a huge comics fan), and get a copy of THIRD WORLD WAR, recently reprinted for the first time in decades, signed by him. It’s striking, reading the story again, just how prescient it is. Worryingly so. But it’s a great read as well, as you would expect, and I’d heartily recommend it. 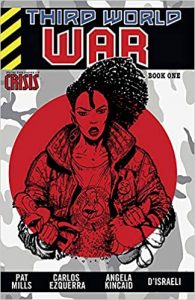