It’s finally time for me to lift the lid on a subject I haven’t talked about before, but after a flurry of interest in the topic over the past few weeks, I can’t avoid it any longer. As you know, I try to keep some things quiet, and private, especially when it comes to my family, but it seems that it has been noticed that my father is indeed the actor, Keith Barron. Keith, or “Pops” as I call him, is usually most remembered for the 80s sitcom “Duty Free”, which we always tease him about, given his long and successful career in all kinds of roles.

No. I can’t do it. I can’t keep this up. Unfortunately, this is all nonsense.

I guess I can truly say that I have arrived. Never mind the books, or the adaptations, or the reviews – the true litmus test of success is whether or not there is any concocted scuttlebutt attributed to you. I have to admit there is genius here. The secret of a good rumour is whether it is so unlikely that it becomes plausible, and maybe undeniable. It reminds me of a great story my brother told me about a night-out he was on. His group ended up in someone’s private function by accident, and eventually they were noticed and someone challenged them on whether or not they should actually be there at all. One of his friends, quick as a flash, when asked who he was, said “Oh, I’m Christine’s son” which placated the questioner, and they were left to finish their drinks without further challenge. That always makes me laugh when I think about it. I wonder if there even was a Christine at the party?

I have my suspicions who might be behind this wonderful bit of nonsense. In fact, I’m tempted to lean into it a bit in interviews, and add a bit more flavour to it. Perhaps I should say that Rene from ‘Allo ‘Allo was my godfather? Or I used to be babysat by Windsor Davies?

I find it fascinating. How a little bit of nonsense can attach itself to your name, and there it is, taken as read. As someone who makes a living making things up, I understand the power of stories, big and small, but I’m not sure I’ll ever fully understand why some things gain traction and others don’t.

So, no, Keith Barron is not my father. But, then, I would say that, wouldn’t I? 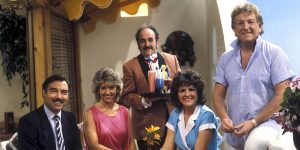