It’s been a while since I’ve written about any televisual distractions, but I’ve just spent a good few hours immersing myself in GANGS OF LONDON, and found myself thinking about the challenges of writing good action as opposed to the differences in choreographing action for a visual medium like television or film.

GANGS OF LONDON is all about the action – it’s defiantly proud of its pulpy roots, with a whole raft of archetypes butting heads and growling threats at each other, with deception, betrayal and violence very much the order of the day. To be honest, it wasn’t the sort of thing that would normally push its way to the front of the queue for me to watch. But there’s real pedigree behind it, chiefly Gareth Evans, the director of the two RAID films. Those two films are remarkable, kinetic and exciting, and so I’ve always been keen to see what he did next. I felt I’d have to give GANGS OF LONDON a shot.

And that’s the real attraction – the action sequences are astonishing. They work on two levels for me – there is the grubby, “real” feel of them, where every punch and kick has consequences, and the combatants are far from the clichéd wisecracking immortals we’re used to seeing. It creates a real sense of jeopardy, and given how the series begins, there is also an undercurrent where you can never be too sure what the outcome might be. Then, above that, there is the technical mastery, where complicated set-pieces are managed like clockwork, with the viewer never being in doubt as to who is where and when. Compared to the confusion from action sequences driven by quick cutting hand-held camera set-ups as seen in many mainstream productions, this clarity is unusual and welcome.

Of course, like any good author, I’m always looking to strip something down for parts – were there any techniques used that I might be able to cannibalise and use in prose? I like to think writing action is a strength of mine – given the field I write in, it is something of a pre-requisite, after all. If GANGS OF LONDON reinforced anything for me, it was the need to always let the reader know exactly what is going on, how the set-piece develops, and to be constantly aware of timings. For instance, there are definite, conscious “breathers” in the action in GANGS, something I try and do in my action sequences. Constant, non-stop explosions or gunfire are distracting both in terms of realism (I’m constantly told that real-life exchanges are brief and conclusive) and, in fiction, a relentless tone will just lead to a kind of exhaustion. The prose equivalent of “this goes up to 11”. I also try and steer clear of deus ex machina in an action sequence – if there is to be a reversal, then that reversal needs to be seeded. For instance, if someone picks up a knife to perform the killing blow, then that knife needs to be dropped earlier in the scene somehow.

Clarity in action is a real challenge. GANGS OF LONDON really achieves this. 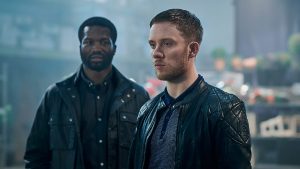