I mentioned earlier this month that I was feeling positive about being able to get back to doing some of my favourite things again, now that it seems (insert caveat) that things are moving towards the better.  One of those is going to the cinema.

Like a lot of people, I’ve got a pretty decent set-up at home, and family film nights are a real occasion in our house.  But, despite that, there’s nothing quite like going to the cinema, and sharing the experience with a disparate group of people, especially when the film is so good that it draws gasps, giggles and glee from the audience.

Some of my absolute favourite moments have been those that have drawn incredulous gasps or loud laughter, and sometimes – rarely, and, as a stiff-upper-lipped Englishman, something not at all to be encouraged – cheers and whoops.  I remember the directors of one of the Avengers films posting during the first lockdown a secret recording of a full house going bananas during one of the climactic scenes from their film from the previous year, and I have to admit, I found it strangely emotional.  Not to mention the numerous occasions where I’ve found myself in a packed cinema watching the latest Pixar movie and hearing the sniff-sniff-sniff of a few hundred people all with a bit of dust in their eye.

So, it’s been a long wait, but there are some huge films queueing up for later in the year – DUNE, in particular, sticks out for me, not least because a) I am a massive fan of the director and b) the book was a real staging post in my teenage reading life, as one of the key texts that taught about world-building on a massive scale.  It’s one of those films that I really can’t imagine watching anywhere else but the big screen, with huge visuals, a powerful score and one of the all-time great sci-fi stories to enjoy.  Of course, I’d be amazed if that’s the first film that I wind up going to see – the summer holidays are looming, and there is a more than non-zero chance that it’ll be something animated that I’ll be sat watching, with one or both of the kids.  But, irrespective of how invested I am in seeing whether that talking goose is able to win the bobsleigh competition, let me tell you – I’ll love every single minute of it. 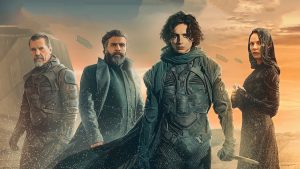